In celebration of one of life’s great characters

Home » Resources » In celebration of one of life’s great characters 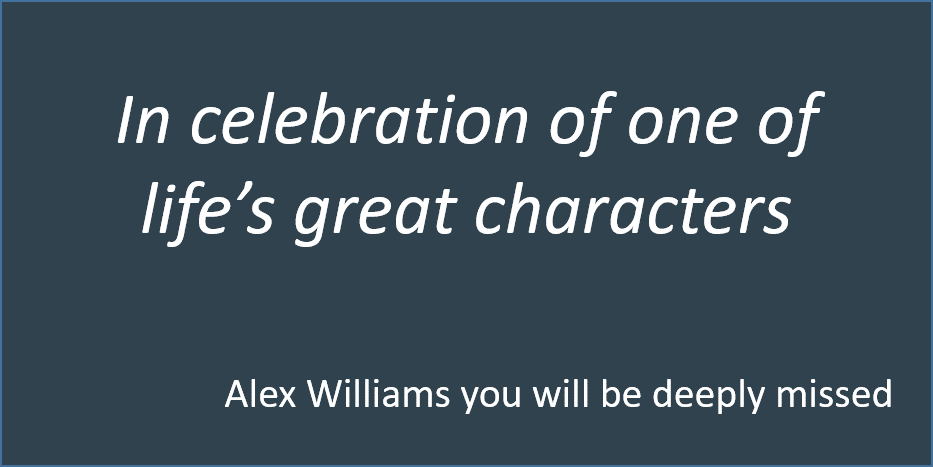 It was after the bank holiday on Tuesday 25th May that the news broke. I had a call from Alex’s brother saying that he had passed away over the weekend. My heart sunk. A cocktail of emotion washed over me – disbelief, sadness, and kicking myself that I had not returned his recent call.

Alex Williams was one of life’s great characters and he was like a brother to me for many years when I founded Succeed over 20 years ago. He had a complex deep revolving wit, combined with a fantastic analytical mind, and an instant sociability. Think of a cross between Eddie Izzard’s comic genius and Brad Pitt’s streetwise confidence – that was how I remember Alex – but with so much more depth and range.

It was in this capacity that he sat down with me in a pub one day in 1999 and we decided to start a business together. Initially conceived as the not-very-user-friendly “Elcock and Williams Associates” we founded separate limited companies as contractors for a year or so before settling on a decent Company name – “Succeed Consultancy Ltd”. I’ll never forget his immortal words to me: “Chief – it’s a great name – does what it says on the tin…”.

The early years of founding Succeed were a massive adrenaline rush – we were a great foil for each other – we worked hard and ”Succeed-ed”, riding the wave of PeopleSoft software implementation, and plotting how one day we would write our own HR product to rival it. We became known at companies like BT, Tesco, Morrisons, PwC (where we had both come from), and various other organisations, large and small, and Succeed grew from our small talk in a bar to a £5m+ organisation with over 50 staff.

We had fun dealing with the larger consulting companies. Coming from PwC Consulting ourselves and knowing how the game was set – we were able to regularly “put them to the sword” (one of his favourite phrases), pointing out hilarious disparities between their knowledge/output and their value, and setting up overpaid consultants of the jumped-up variety for sport and their (required) humiliation. It was fun – Alex excelled in the exuberance – and in the main they deserved it.

Along the way we had our disagreements of course, like in all healthy relationships. Sometimes these were solved by bare knuckle boxing in my garden (!), but one day a disagreement regarding how we should take the company forward, resulted in us going our separate ways in business – as I focused on our HR Product (which became elementsuite), and Alex moving into consulting and technical contracting roles at various customers – at which he also excelled.

Alex could hold court at the bar for hours on end, sailing roughshod across all the typical subjects of social taboo – religion, sex, politics, gender, philosophy – but somehow in a way that was not offensive, but decidedly hilarious. He would often take a deliberately controversial position on a subject to goad and play with his audience – and then suddenly, either in response to a sniff of affront or just for his own pleasure and humour, he would deftly reverse his position in a self-effacing way to argue the opposite position. Sometimes you never quite knew where he stood on a topic – and perhaps he didn’t either – but it was funny, really side-splittingly funny. I’ve never laughed as much with someone as I’ve laughed with Alex.

And so it is with great sorrow and fond reminiscence that today I celebrate Alex’s passing from this world – which has been deprived of one of its truly great and fruity characters. My thoughts and prayers are with his family and friends. My enduring memory is of him with a beer in his hand making me and his audience laugh. I hope he can look down and be impressed with where we’ve come with elementsuite – he was part of its inspiration and its muse. I think he’d approve of it.