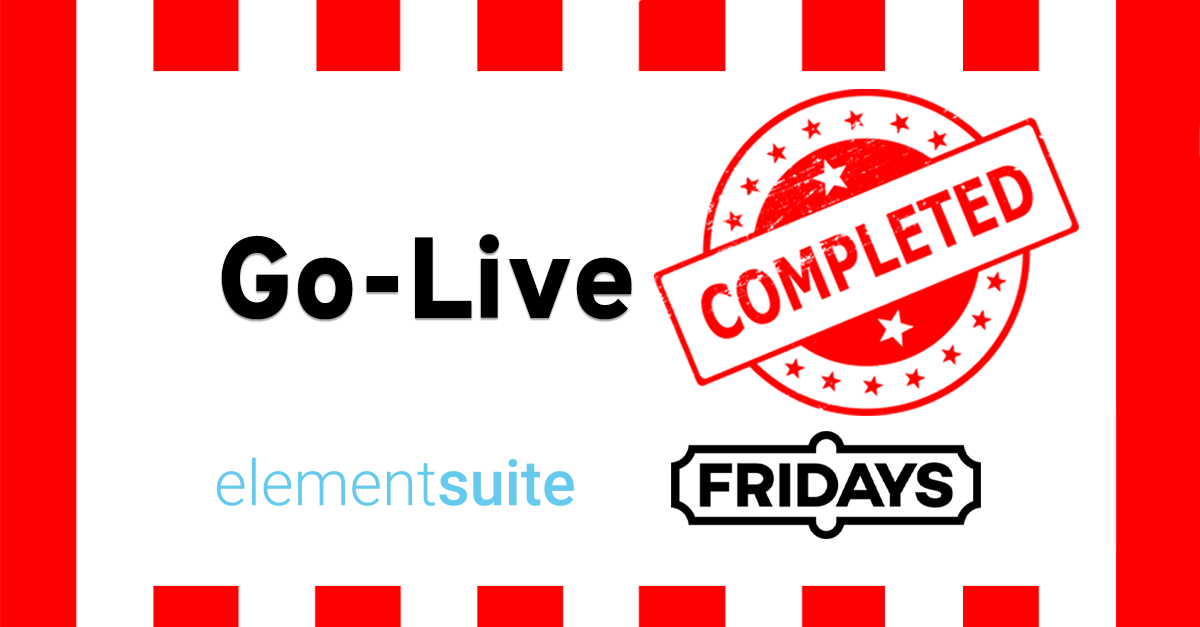 After a successful 2-store pilot, and a subsequent 3-month implementation period, Fridays have deployed elementsuite across their business. The Go-Live on 17th November marked the culmination of a very successful partnership between the iconic Fridays brand and the elementsuite team, during a short period of intense collaboration and project activity.

“I’m delighted to announce that Fridays have successfully implemented elementsuite’s HR platform (HR, Work, Pay, Engage, Recruit). Kudos to the project team from Fridays and elementsuite who have made this implementation happen, on time and in a few short months, truly dispelling the myth that HR software implementation takes years – thank you elementsuite”. Erica Livermore, Chief Technology Officer, Fridays

Aside from the capability, experience, commitment, and hard work of the project team, one of the keys to such a rapid and successful deployment was the use of elementsuite’s unique inbuilt methodology to provide transparency of scope, project tasks, and tests during the implementation.

“We really saw the value of the project implementation methodology and transparency elementsuite demonstrated throughout the project. We understood exactly where we were at any given time and what was needed by who and by when. This has facilitated a faster and dare I say a less stressful implementation, but not at the expense of testing, and solution to match our brand. Existing systems and processes are working in harmony through an intuitive mobile-first interface. This simplicity has also reduced the staff training at all levels”.

Now that the core system has been deployed, elementsuite will be working with TGI as part of the ongoing SaaS service to explore additional business benefits, and deploy additional modules – including Perform, Analytics and Advanced WFM.

“HR and payroll implementations come with considerable complexity and I am delighted that the combined Fridays and elementsuite project team have achieved such a significant milestone. The passion, expertise, work ethic and professionalism was particularly important during this difficult period, interrupted by lockdown restrictions. Fridays were brilliant to work with – understanding our approach and how best to match the depth and configurability of our software to Fridays business needs. We’re proud to have achieved ‘best in class’ when it comes to HR software for Fridays. Leigh Joynson, Head Of Product, elementsuite”

The Jockey Club, the largest commercial horse racing organisation in the United Kingdom have selected elementsuite, a modern cloud-based HR platform for all their people needs. Founded in 1750, The Jockey Club now owns 15 of Britain’s famous racecourses, including Aintree, Cheltenham, and Epsom Downs. The mission of The Jockey Club is to act for […]